Part I of The ECOReport/planet rl a Earth Day Investigative Special Report on the Water Energy Nexus.

California’s drought is a North American disaster-in-the-making. Most of British Columbia’s fresh produce is grown in California. Though Canada’s Pacific Province exports a large variety of fruit and vegetables, it grows less than half the food it needs. Only 5% of the province is in the Agricultural Land Reserve (ALR) and, thanks to Bill 24, this could shrink to as little as one half of one percent (0.5%). Looking at the lands whose protections are being relaxed, one has to ask, does BC prioritize fracking over food?

In The Peace River Valley

“Almost half of the ALR lands are in the North, with 72% of BC’s remaining prime quality lands in the Peace River Valley. To make matters worse, these lands have been designated since the 1970’s to be flooded for what is called the “Site C Dam.” Future generations cannot afford to lose that food growing potential. There is just too much at stake,” said Abra Brynne, Co-Chair of the BC Food Systems Network (BCFSN), in a press release.

This is a fertile region, capable of producing almost as wide a variety of crops as the Lower Fraser Valley, British Columbia’s former “Bread Basket,” which has been converted over the past 30 years to housing. “Unfortunately, I do think agriculture and food systems are not being prioritized as much as it should be,” said Brent Mansfield, co-chair of BCFSN, in an apparent understatement. Agrologist Wendy Holm agreed, when she made her submission to the Joint Panel Review for the proposed Site C Dam. A large segment of the Peace River Valley has been living in the shadow of the Site C Dam since 1957. BC Hydro bought vast stretches of cropland and told farmers not to get too attached to their fields.

If that wasn’t bad enough news both for farmers and the citizens of British Columbia, alike, the Peace River Valley is also in one of the largest natural gas formations in North America.

“Do we use land for food production? Or for gas production? Or for hydropower? I guess my wish is that we have a society that is using fewer fossil fuels, and increasing local production of food,” said Dr Terry Moreau, Associate Director of Community Programs at UBC Botanical Gardens. Does this adequately sum up the facts or is a different mechanism afoot. Energy production is beginning to look like “The only game in town.”

Linda Geggie, Policy Chair of BCFSN, added, “When you put infrastructure in place, it causes a lot of loss of agricultural land. We’re looking at the Peace (River Valley) as a key area and we’re looking at major dam projects. Obviously you’re aware of Site C, and that is going to take up huge tracks of land. People say that’s not LNG, but a lot of the development of power, in Northern BC, is related to the development of LNG (Natural Gas).”
The Government’s Policy

Official opening of the Agriculture Centre of Excellence ACE

A Ministry of Agriculture spokesperson defended the Government’s policy.

“Land use decisions within the ALR are up to the Agricultural Land Commission. The ALC is an administrative tribunal, arm’s length from government, and government does not interfere in that independent decision-making process. The ALC looks at many factors when carrying out its mandate and each application has its own distinct set of circumstances and is considered on its own merits,” he said.

The spokesperson pointed out that 38,000 net-new hectares have been added to ALR since the Liberal Party came to power in 2001.

Food Systems Are Not Being Prioritized 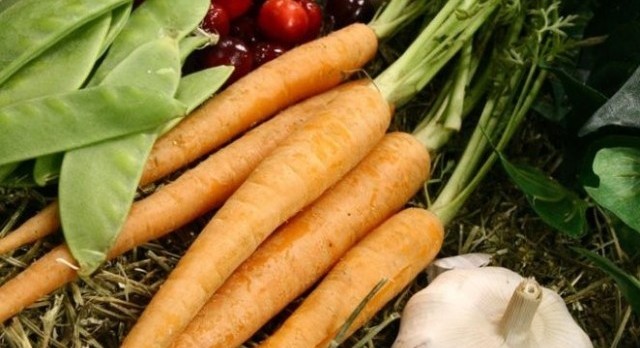 Photo Credit: EAT! Vancouver 2005 – Food and Resturant Show at BC Place by kris krüg via Flickr (CC BY SA, 2.0 License)

Although quick to defend the Liberal Party, that statement was made years before California’s drought, which is now in its fourth year.

Linda Delli Santi, executive director of the B.C. Greenhouse Growers Association, told the Globe and Mail that California’s low-value crops and less productive fields are starting to disappear but their “greenhouse crops are still humming along nicely,” seeing a fresh business opportunity.

There has been much debate on how much the prices of fruit and vegetables will rise this spring.

Over the Next Five Years

Brent Mansfield, Co-Chair, BC Food Systems Network believes that as California’s production drops, BC will experience price increases, of between 25% to 50%, over the next five years. Similarly, this prediction was made a little early, prior to the revelation that there is virtually no snow pack on California’s Sierra Nevada Mountains. Despite the new information, Mansfield inexplicably reconfirmed his earlier estimate.

It is not yet known how strongly the drought will effect food prices in the Central or Atlantic regions. British Columbia appears to be one of the most vulnerable areas, due to its reliance on food imports trucked up I-5 from California’s Central Valley.

The provincial government is exacerbating the problem by favoring revenues from energy mega-projects, like LNG (natural gas) and the Site C dam, over the more immediate and basic need to produce more food.

Holm wrote that “the waters backed up behind the Site C Dam will submerge enough farm land to feed a million people,” not great planning, one might think, for a province so dependent on imported foodstuffs.

Geggie looks to the future, “We have to have a very resilient system. We can’t be looking at these large scale agricultural models as the predominant way.”