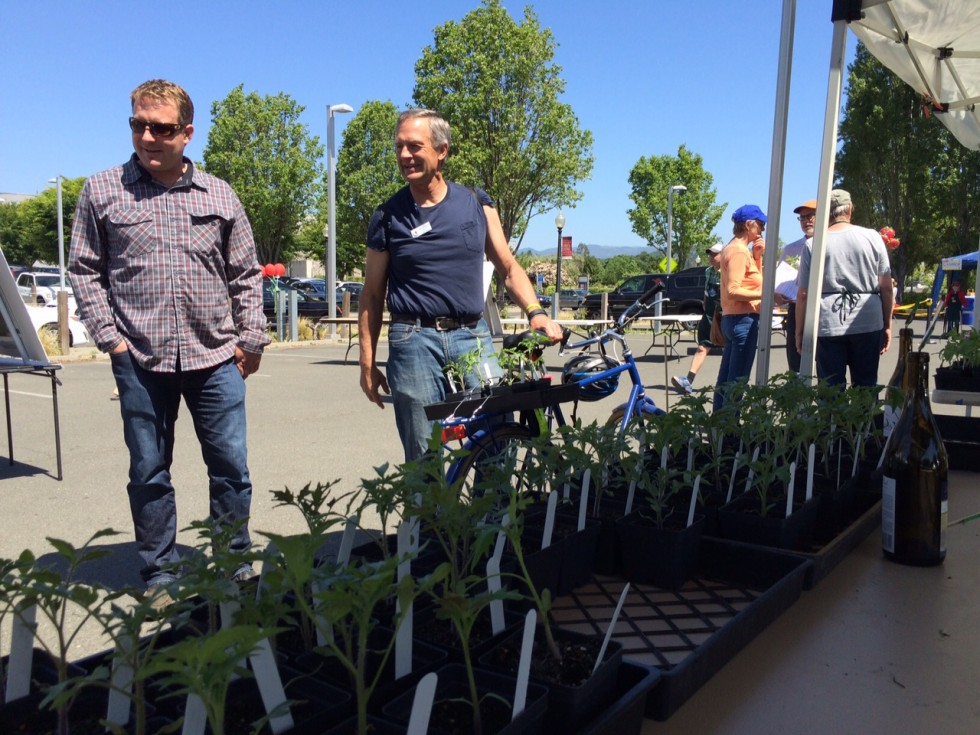 People tend to think of California’s drought as a local problem, only it happens to provide most of the North America with fruit and vegetables.

When you consider that vegetables are mostly composed of water, one has to ask what will happen when it runs out?

The Napa Valley is in what was once one of North America’s most abundant ecosystems. Only most of the tidal wetlands that prospectors found when they came to seek gold in 1848, disappeared decades ago.

Looking back over the 75 years he has been in California, Paul Rogers said that people once came to California because of the lushness, but “that is declining.” He worries that there may come a day when there won’t be any water, but does not expect to see it in his lifetime.

Though California has had droughts before, this is the fourth year and conditions are getting worse. There is virtually no snow in the Sierra Nevada, which means nothing to provide the Spring runoff that brings life to the entire Sacramento-San Joaquin Delta. This is a very serious problem in areas like the Napa Valley, which rely on groundwater.

“I’m very concerned, we all are,” said Dottie Lee.

Though she laughed easily, her countenance displayed deeper emotions. Dottie did not like to use the word “fear, which “is a negative word,” and her conversation focused on solutions.

“People have to really look at where they use there water, only use it where you really need to and be very selective,” she said.

“It’s interesting to hear the push-back on the Governor’s plans (to impose a 25% reduction on water usage in cities and communities). Some of it is he is asking us to cut, but we cut last year. They are using the 2013 as a baseline, but some cities and counties are in more dire straits than others,” said Napa County Supervisor Brad Wagenknecht.

He added, “I think the long term solution is to realize this is the new normal.”

Dottie suggested the state’s restrictions on residential water usage are not enough, “We’re going to have to look at commercial use too.”

Supervisor Wagenknech described the steps other Napa County communities are taking to remove a bunch of “agricultural straws from the acquifer.” Last December, they broke ground on the 12-mile long Milliken-Sarco-Tulocay recycled water pipeline. Construction has just begun on a slightly smaller recycled water pipeline at Carneros. An article in the NAPA Valley register describes the latter as a $20 million project that has been under discussion for decades. The 9-mile-long pipeline will convey treated sewer water to thirsty cropland.

“The biggest thing for homeowners, is taking out lawn,” said Dottie Lee.

A lot of cities are now offering cash to people who get rid of their grass. American Canyon has just outlawed using lawns in new construction.

“You heard the Governor wants to take out 50 million acres of turf… Lawns are going to be a thing of the past,” said Supervisor Wagenknech.

Matt Jones said home gardeners are going to get by this year, but they’re concerned about the future:

“What is going to happen next year and the year after in this drought trend. I’ve heard estimates that it could be as long as ten years before we get back to what we consider a normal rainfall.

“Today we’re selling tomatoes (plants) and people are buying fewer because they are concerned about water availability.”

“I’m going to grow a few more myself this year, not knowing what to expect next year. So I’ll be doing some canning and processing of home tomatoes that I wouldn’t normally do just because I think I might be ahead of the drought situation. This might be last opportunity to grow healthy tomatoes.”

Sue Berry gave produce to the food bank last year, but she won’t be doing it this year.

“I have a concern that the food bank is going to get hit hard this year, if other people do the same thing,” she said.

Her advice to people buying tomatoes cuts to the heart of the situation through-out North America. Our communities have become so interconnected that most have ceased to grow most of their own fruit and vegetables. Ninety percent of the tomatoes found in US supermarkets come from California. Berry suggests that before they buy tomatoes, customers should ask how far they came before reaching the market? What resources were consumed getting there?

The problem is much bigger than tomatoes and one of the best illustrations comes from across the border in British Columbia. Canada’s Pacific province has virtually ignored its agricultural sector. The most abundant crop in the fertile Lower Fraser Valley is houses. Some of the province’s most promising farmland is in the Peace River valley, where the threat of the Site C Dam has discouraged development for decades. Premier Christy Clark’s government recently approved the project, which will submerge 9,429 acres of class 1-5 agricultural land. British Columbia is focusing on the prospective riches connected to developing fossil fuel, not food. BC no longer grows most of its staples.

“We are importing from California when we could be producing it ourselves,” said Brent Mansfield, of the BC Food Systems Network.

He recently predicted that the province’s food prices could jump 25% to 50% over the next five years.

That was before Governor Jerry Brown announced there was grass on parts of the Sierra Nevada that are normally covered by five feet of snow. There won’t be much of a Spring runoff this year.

California has had droughts before, but many people believe this one is amplified by human mismanagement.

Asked if fear is a component of the situation, Napa County Supervisor Brad Wagenknecht said, “It often moves us in the right direction.”