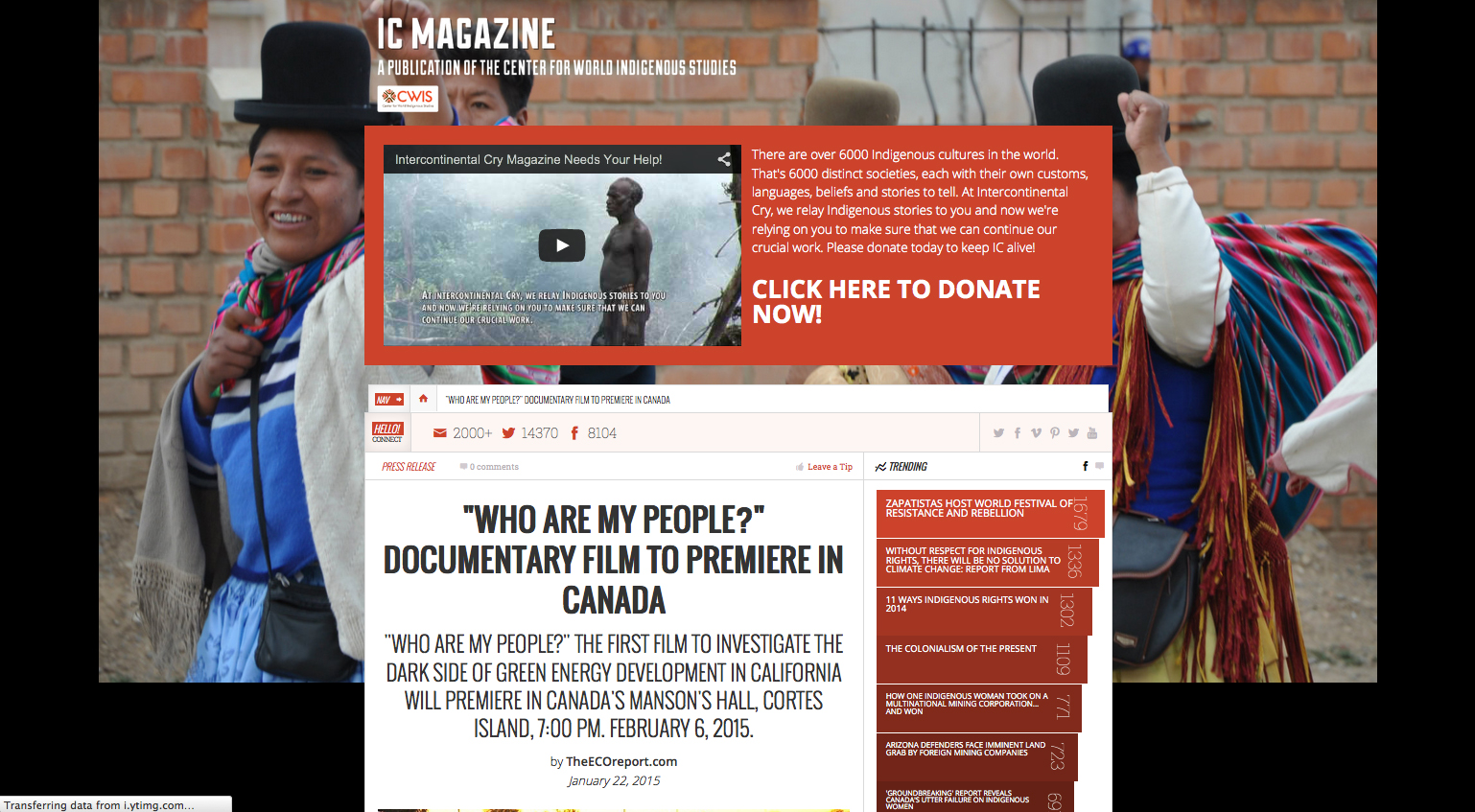 “Who Are My People?” Documentary Film to Premiere in Canada

“Who Are My People?” the first film to investigate the dark side of green energy development in California will premiere in Canada’s Manson’s Hall, Cortes Island, 7:00 pm. February 6, 2015. 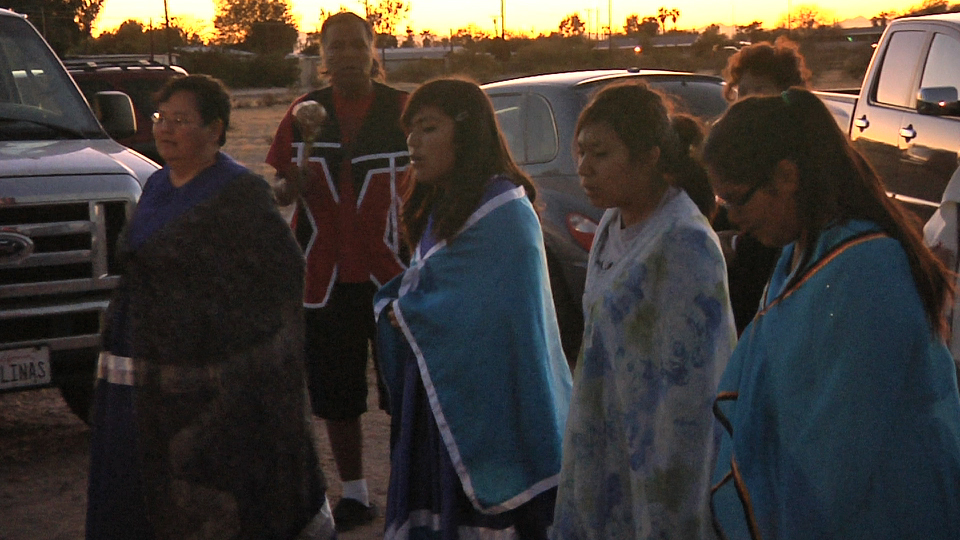 Article 8 of the United Nations Declaration on the Rights of Indigenous Peoples states, Indigenous Peoples and individuals have the right not to be subjected to forced assimilation or destruction of their culture. But in the US and Canada, as well as many other nations, what occurs in practice, on the ground, does not always conform to these ideals.

“Who Are My People?” from documentary filmmaker/investigative journalist Robert Lundahl, explores the destruction of Native American cultural sites, in-tact desert ecosystems, and biodiversity values, in the rush to profit from “Green Energy.”

Even in the United States, which considers itself among the most advanced or progressive democracies, indigenous communities are subjected to the destruction of their cultures, while those who should know better look the other way.

In the quest to develop green energy in the deserts of California, for example, some say environmentalists and “Green Energy” supporters lack an understanding of the consequences of their actions and choices. Global energy firms like NextEra, Brightsource, and Iberdrola participate in what some have called a “Gold Rush” for the new “Green Energy” profits.

This is the subject of Emmy® Award winning filmmaker Robert Lundahl’s new documentary, “Who Are My People?”. “It may seem inconceivable to those on the left,” he says, “That their own ambitions could be aligned in the historical context with “Indian fighters,” John C. Fremont and General George Armstrong Custer, who suffered defeat at the Little Big Horn.”

At risk are a fantastic array of Native American cultural sites, now facing the bulldozer. The Colorado River Indian Tribes (CRIT) have litigated the issue, filing a complaint on December 4, 2014. “The religion and culture of CRIT’s members are strongly connected to the physical environment of the area, including the ancient trails, petroglyphs, grindstones, hammerstones, and other cultural resources known to exist there,” the tribes allege in the complaint, filed on December 4 in U.S. District Court Central Division of California, Eastern Division. “The removal or destruction of these artifacts and the development of the Project as planned will cause CRIT, its government, and its members irreparable harm.”

Lundahl, a long time environmentalist, himself, explains, “There is a lack of awareness on behalf of the environmental community of indigenous rights.” Solar Power expert Bill Powers P.E. explains in the film, “Isn’t it great that the big environmental groups and the utilities can agree on strategy… It just happens to be a very high impact strategy.”

Mainstream environmental groups like the Sierra Club and NRDC have supported large solar despite environmental and cultural degradation.

The issue has come to a head in the California deserts where the ARRA stimulus program loan guarantees and cash grants have provided up-front capital for developers in the hundreds of millions of dollars. Companies like Solar Millennium, a large solar provider, now bankrupt, and Brightsource, whose string of failures to permit large solar projects, have contributed to what some perceive as an industry “black eye.”

The industry as a whole has been criticized for Pacific Flyway avian mortality from projects like Brightsource/NRG/Google’s Ivanpah, and for the deaths of perhaps thousands of protected desert tortoise from the grading and development of project lands totaling up to 5 square miles each, Ivanpah and First Solar’s Silver State included. The California Energy Commission identified the likely destruction of over 17,000 cultural sites, opposed by the Native elders in the film.

Lundahl’s film, “Who Are My People?” includes gorgeous aerial photography and haunting descriptions of over 20 large geoglyphs, now endangered. They form a mythic landscape, one from from another time or dimension of experience, located along the Colorado River. Indigenous elders, Ron Van Fleet (Mojave), Phil Smith (Chemehuevi), Alfredo Figueroa (Chemehuevi), and Preston Arrow-weed (Quechan), tell the story.