In 1999, Don Alfredo Figueroa, directed a project to accumulate and distribute music of Early California, which has meaning to his family’s heritage. Begun under the auspices of Escuela de la Raza Unida, a Chicano/Indigenous alternative school, which the Figueroa family started in 1972, the dual CD set, Nuestro Gran Principio en Esta Tierra, or Our Great Beginning on this Earth, contains ancient Chemehuevi songs, performed by tribal elder Larry Eddy (Which may be heard as part of the soundtrack of “Who Are My People?”).

For an understanding of the origins of the school itself, founded to address educational disparities and a lack of indigenous-relevant curriculum for Native American and farm worker youth, see the short film, “The Battle of Blythe”, created for the 40th anniversary of the school’s founding in 2012. It is narrated by Demesia Figueroa.

Here, music would be part of the educational experience, including historic work songs, ballads to historic figures such as Cesar Chavez, rap, cumbia interpretations, and tribal chants.

Born under a hot tin roof in the blazing desert sun, August 14, 1934, Figueroa is of Chemehuevi Indian heritage on his mother’s side and Yaqui heritage from father Danuario. His mother’s family had come to California from Northern Sonora, Mexico in the 1800’s, before California had become a state. Family relation, Joaquin Murrieta, was a miner, working the goldfields near Sonora, California (the name reflecting the miners’ origins), at Murphy’s Diggings, before John Sutter “discovered” the precious metal and the Gold Rush began. “They overran us” Figueroa explains. 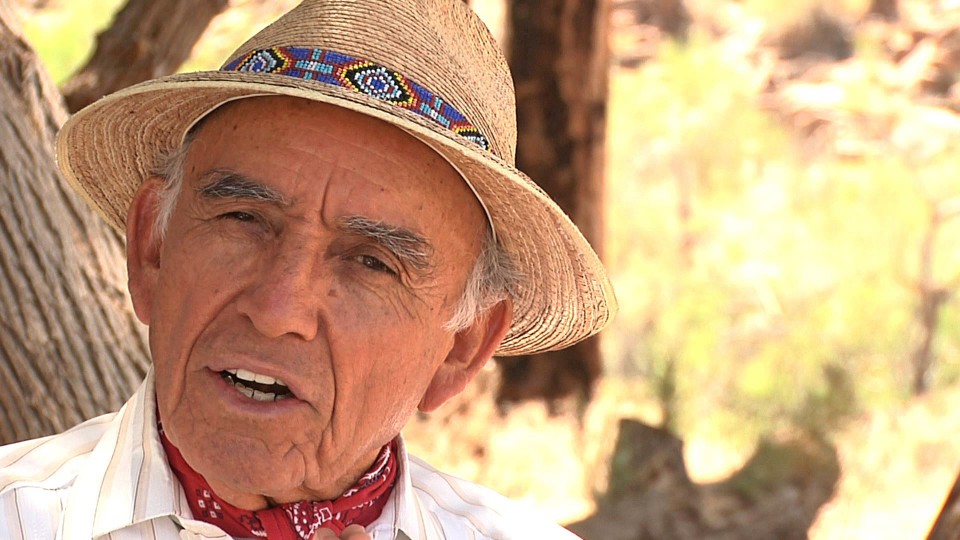 Alfredo Figueroa, from “Who Are My People?”

Murrieta remains a controversial figure. Alternately portrayed as a thief, horse rustler, Robin Hood, and Freedom Fighter, Murrieta was part of the California history I learned as a child.

Raised in Pasadena, with visions of Murrieta and his “posse” evading capture on the other side of Mt. Wilson, (which I could see from my home), I had even attended summer camp at a place called Hidden Valley, known as a Murrieta “hide out,” along Angeles Crest Highway.

The Figueroa family story holds that when US miners overran the gold fields in 1848, Murrieta was beaten, his mine was stolen, and wife raped and killed. Murrieta sought to avenge the death of his wife by relentlessly pursuing the attackers. Some say he was trying to raise an army and return California back to Mexico. That’s why he was stealing horses and bringing them to Mexico. In turn, he was pursued as a “bandit.”

The corrido (Spanish pronunciation: [koˈriðo]) is a popular narrative song and poetry form, a ballad. The songs are often about oppression, history, daily life, and other socially relevant topics. It is still a popular form today. The corrido derives largely from historic literature of the time, the “romance”, and in its most known form consists of a salutation from the singer and prologue to the story, the story itself, and a moral and farewell from the singer. Until the arrival of electronic mass-media, the corrido served as a main informational, educational and historical outlet, a vehicle for storytelling, like a film.

Of all the corridos sung in California. The Corrido de Joaquin Murrieta stands out. Californio and Mexican-American families often would refrain from singing it in public for fear of reprisal. Figueroa’s grandfather was jailed in Arizona after singing the Corrido. Yet the Corrido de Joaquin Murrieta is a “master narrative” of the history of California, and the struggle of the Californios to maintain lands and influence following the treaty of Guadalupe Hidalgo — which ceded California from Mexico to the US.

By 1975, times had changed, and when an official of the Smithsonian Institution heard Figueroa sing the corrido in Calexico at a farmworkers rally (UFW), he and his family were invited to sing the Corrido de Joaquin Murrieta in Washington D.C.