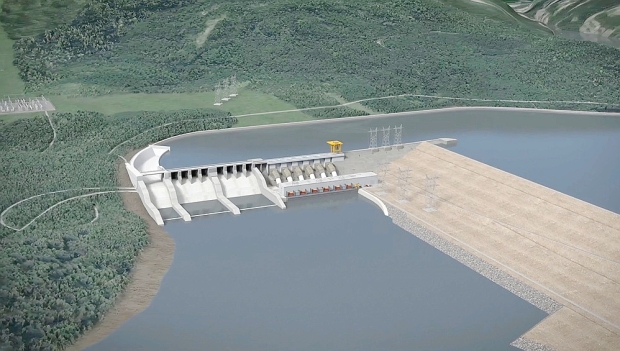 In addition to being one of the province’s most promising agricultural areas, the Peace River Valley sits on the Montney shale formation and is location of the proposed Site C Dam. This is “double trouble” for agriculture in British Columbia, as not only has the area been proposed to be flooded, but it is now flooded with speculators and energy companies wishing to frack the life out of the place before it is.

With the revelations of the severity of California’s drought coming at Canadians a mile a minute, uncertain pressures on the food supply from Canada’s trading partners in an ever drier California stand starkly in opposition to energy profiteering and collusion by the Provincial government and the Cabinet. Amid predictions of $7 heads of broccoli on the horizon, the government acted, but it acted not to protect the food security of Canadians, but to protect the pocketbooks of energy companies.

In a deft deployment of “finger pointing,” a Ministry of Agriculture spokesperson recently informed the ECOreport that the Agricultural Land Commission (ALC) makes the decisions regarding land zoned for agricultural use . “The ALC is an administrative tribunal – arm’s length from government – and government does not interfere in that independent decision-making process.” He did not mention the fact two weeks prior to our interview, the Cabinet of British Columbia removed land from the ALC — and from agricultural use — for the Site C Dam flooding. 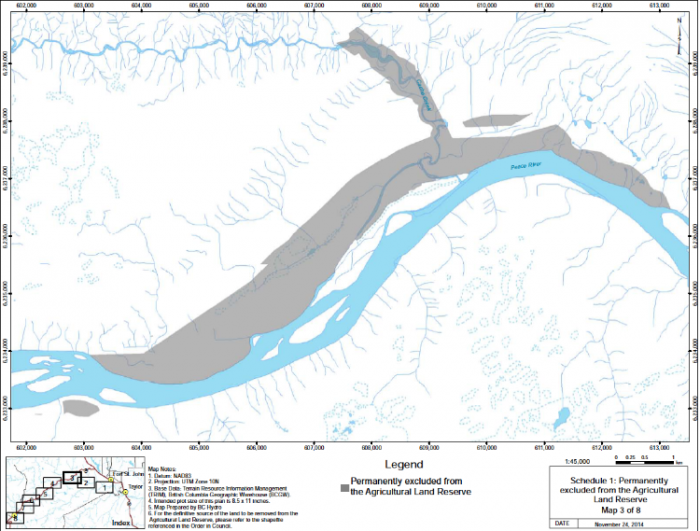 Map 1 of Lands Excluded from the ALR

All in all, close to 4000 hectares were transferred out of the Agricultural Land Reserve (ALR).

There is nothing illegal about this transaction. There are clauses within the ALC Act that provide the government with the needed power and leverage. One bears the appropriate title “Oil and Gas Commission Delegation.” The ALC can “delegate” its decision making authority to an “authority” – which is defined as “an agent of government, a public body or public officer” with whom the ALC has an agreement.” We do not yet know which clause Christy Clark’s cabinet used to justify their action. Perhaps Clark wishes to avoid the brown stain of loamy mud upon her knees in favor of the “green” of hydropower development on a massive scale.

According to Martin Collins, the Agricultural Land Commission’s Regional Planner for the Northeast, cabinet government interventions are rare and “the latest OIC (Order In Council) was to help facilitate the Site C Dam and it’s several thousand hectares.”

“The province did this. The ALC did not do this. We don’t have the information about OICs, which are cabinet decisions. That source doesn’t come to us. We know about as much as anybody else does. We have to go and ask the Ministry of Agriculture about the specifics which hold. We don’t have details about it because we weren’t the decision maker,” he said, figuratively diving under his desk.

The Lieutenant Governor of British Columbia signed the OIC into effect on April 8, 2014.
NDP Statement

Lana Popham, the New Democrat Opposition spokesperson for Agriculture and Food, issued a statement saying , “A couple weeks ago we saw the BC Liberals exclude, by Order In Council, almost 4000 hectares of land from the Agricultural Land Reserve in the Peace River Valley. They overrode a quasi-judicial board, the ALC, which is independent of government, without a mention to the public. ”

(This is not the first time Clark’s Government has utilized this type of tactic. They approved a twenty-fold expansion of the Texada Island coal terminal without notifying local residents. An amendment to the Parks Act made it possible for companies like Kinder Morgan to conduct the preliminary studies needed for oil pipelines to be built through public parks.)

According to Popham, “Minister Steve Thomson signed off on this OIC … which is sadly ironic, because before politics he was the Chair of the BC Agriculture Council… representing BC agriculture.”

Cabinet Actions Of This Type

Collins said cabinet actions of this type are rare, but do happen. Six Mile Ranch was excluded from the Agricultural Land Reserve in 1997. Another parcel was taken in Delta, during the early 2000’s.

This latest OIC maneuver removes any hope British Columbians had that the Agricultural Land Commission could protect their food security interests. 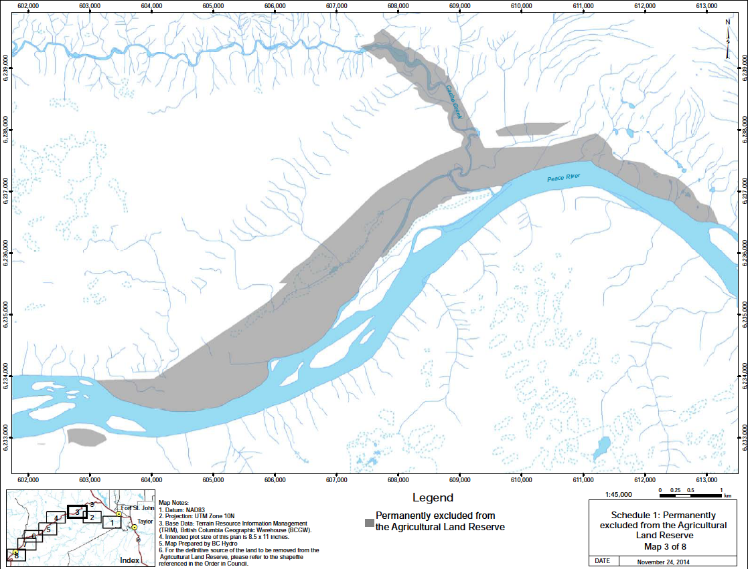 Map 3 of Lands Excluded from the ALR

It also raises questions about the Ministry of Agriculture’s credibility. Doublespeak is language that deliberately disguises, distorts, or reverses the meaning of words. When ordinary people use it, we call them liars. How does one explain the Ministry’s assertions that ALR decisions in the Peace River region are being made by an independent body? Is doublespeak Government policy in British Columbia?
Court Challenges Against Site C

Meanwhile the first court challenges against Site C are being held in Vancouver.

On Monday, the Peace Valley Landowners Association Association argued the government’s approval of the project should be quashed because, “A decision cannot be reasonable if the decision-maker does not consider the factors the statute requires them to.”

A lawsuit by “Treaty 8” First Nations tribes went before the BC Supreme Court at 10 am.