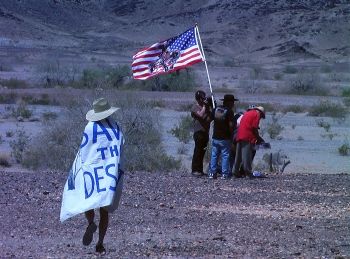 Briggs continues, “When I saw the red lines on the color version of the Notice to Proceed, it became clear that the access road for the Blythe Project was going through a swath of land that was not included in the environmental impact statements description of the affected land: namely, the western half of the eastern half of Section 26 of Township 6 South, Range 21East, of the San Bernardino Meridian.

Plaintiff La Cuna has alleged that construction, which began in May at the site of the German firm Solar Millennium’s Bythe Solar Project, endangers several large Native American geo-glyphs. The alleged destruction two large glyphs sparked protests recently at the site and at Solar Millennium headquarters in Oakland, CA. Solar Millennium is a partner with Chevron Energy Solutions in the project.

In the “Request for TRO,” plaintiff and La Cuna Founder Alfredo Acosta Figueroa states, “I am a tribal monitor for Native American cultural sites and artifacts. There are over a dozen significant geo-glyphs or other features in or near the site of the Blythe Project, which is being challenged in this lawsuit. Several geo-glyphs and sacred features within the Project boundary will be directly impacted by the Project. Even geo-glyphs that are outside the Project’s primary footprint or the footprint of the linear facilities are adversely affected because, among other things, access is impeded, air pollution and added congestion quickens the deterioration of the features, privacy necessary for certain ceremonies is lost, and construction and operation noise drones out ceremonial songs, chants, and stories that are essential to the exercise of Native American religious and cultural practices.”

The Blythe Geo-glyphs are not the only cultural resources endangered by a planned “build-out” of large solar in the Mojave Desert. According to the testimony of Elizabeth A. Bagwell, Ph.D., RPA and Beverly E. Bastian before the California Energy Commission, “This analysis estimates that more than 800 sites (Cultural Resource Sites–Sacred Sites) within the I-10 corridor, and 17,000 sites within the Southern California Region will be potentially destroyed (by large solar development in application with the BLM). The BLM denies any geo-glyphs are endangered, but La Cuna technicians indicate several remain on the project lands. Robert Lundahl’s video “Massacre in the Rocks,” specifies sites that are vulnerable (http://www.vimeo.com/24785962). La Cuna De Aztlan’s GPS coordinates for these sites are available to all parties.

Indications are that the geo-glyphs may be very old. According to anthropologist Jay von Werloff et al., in a paper titled “AMS 14C Age Constraints on Geo-glyphs in the Lower Colorado River Region, Arizona and California, in Geo-archaeology: An International Journal, 1995, a representative sample of geo-glyphs along the Lower Colorado date from between AD 213 to AD 1408, with margins of error of between 57 and 392 years depending on the specifics of a particular glyph and the location. 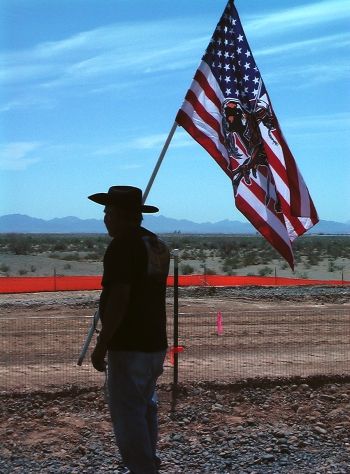 According to La Cuna de Aztlan’s Chairman, Patricia Pinon, the pressure of the ARRA “fast track” process approved by Secretary of the Interior, Ken Salazar resulted in inadequate Environmental Impact Statements and inadequate government-to-government consultation with the tribes and native groups. Bill Powers of San Diego based Powers Engineering, a solar energy consulting firm states, “So the Orwellian aspect of the government involvement in this process is that now instead of the analysis being focused on is this a cost effective project, is it a project that will minimalize or eliminate environmental damage, is it a good investment strategically for this state, all of that is secondary for the race to get the permit so that the project can get a 30 percent cash grant. In this case — that’s $600 million up front per project. So the money is so big that it’s now like a bull rush to the finish line.” In order to qualify for rebates, Solar Millennium needed to “break ground” at the site. So far, the company has graded a 100 ft. wide transmission corridor extending along the path of a former gas line road to Highway 10.

Time is weighing against the defendants. On April 6, 2011, Ronald Liebert appearing at a scheduling conference in another proceeding on behalf of Solar Millennium, LLC, told the administrative law judge that the Blythe Project still did not have all necessary approvals and that it needed them by September 2011.

“We have some other important unfortunately major time pressures. And it has to do a lot with financing the project. Of overriding concern to us is, unfortunately, by the end of September, we have to have proved up this case. We have to have PUC approval. We have to go back and get Energy Commission revised permits. We have to deal with BLM. We have to submit all of that, and plus we have to give DOE significant amount of time to ask questions and answer them all by September 30th. If we miss that date, there is a high likelihood that financing this project would be in jeopardy. Whether or not that means a project could be canceled, whether or not that means the project can’t get built anywhere in the time frame is really uncertain. All we know is we’ve got this date. And, frankly, we are scared to death right now because the government is debating whether to shut down U.S. Government, and defund certain projects. And to the extent that can’t get it all settled even before the 30th, we don’t know what DOE will do. If funding runs out for them in mid-September, if we are not in by then, we have a big problem. So we will do anything that you require to get this in and done.”

According to plaintiff and Chemeheuvi Elder Philip Smith, of Needles, CA, the loss of these sites and trails would be permanent, and would irrevocably impair his ability to practice his religion. His religious practices are inextricably tied to his ability to visit and pray at the sacred sites, which provide for him the ability to make “the connection between earth, self, and spirit” that are central to his religious beliefs and practices. In regards to the pending destruction of the geo-glyphs, rock scatters and mounds, trails and other archaeological features situated within and adjacent to the boundaries of the Blythe Solar Millennium project, Smith expresses himself in the following way:

“If you erase the geo-glyphs and trails (at the Blythe Solar Millennium Site and surrounding areas,) those geo-glyphs and trails are sacred sites in my religious beliefs and practice. If you erase all of that, I lose the ability to make the connection, through prayer and communication with the sacred earth sites, while at the sacred site that is the center of my religious practice. Our church, the church of the Chemehuevi and Mojave and other Colorado River Indian tribes, is on the rocks and it is on the trails such as the one that passes in the area near the geo-glyphs. These, the sacred sites of the desert, of the earth, are where we pray and hold religious ceremonies. The Blythe Solar Millennium Project will destroy these sacred sites where we pray and practice our religion.”

Project applicants and the Department of Energy have since been named as defendants. The suits follow the filing of the Quechan tribe’s legal challenge to the imperial Valley Solar Project which was granted an injunction by Judge Larry Burns on December 15, Civil Action No. ’10CV2241 LAB CAB, United States District Court for the Southern District of California.