What do Halliburton, Georgia Pacific, and James Imhofe have in common with Rachel Carson, David Suzuki, and Bill McKibben? Environmental communication. The field is emerging and often misunderstood. It is assumed to be the domain of activists, but it comprises a wider spectrum of interests and messaging. It represents the conversations and meta-conversations about environmental issues, and our relationship to the biosphere and inter-species effects.

The field has changed. Following 911, the 2008 economic recession, and the 2009 defeat of “cap and trade” bills to moderate carbon emissions, some sounded the “death knell” for the American Environmental Movement.

Victories that were forged in earlier times through a political process of concession and dealmaking, and sometimes pure momentum, began to unravel.

Nicholas Lemann writes in the New Yorker “When the Earth Moved, What happened to the environmental movement?”

“The story of the Environmental Defense Fund is illustrative. E.D.F. (is presented) as a raggedy group of amateur activists on Long Island, whose motto was “Sue the bastards!” It helped to get DDT banned in New York and elsewhere, and successfully pushed for water-safety standards nationwide. By the mid-eighties, though, it had become moribund, and a new president, Fred Krupp, then thirty years old, advocated an accommodationist direction for the movement, focussed on deal-making with big business and with Republicans. In the summer of 2006, Krupp and a few allies began assembling a coalition that met regularly at the offices of a professional mediation firm in Washington. He persuaded a number of major corporations with heavy carbon footprints, like Duke Energy, BP, and General Electric, to join. The coalition became an official organization called the U.S. Climate Action Partnership, funded primarily by a handful of major philanthropists and foundations. Shortly before President Obama’s Inauguration, USCAP released the fruit of its labors: a draft of the ill-fated carbon-emissions bill.”

Ted Nordhaus and Michael Shellenberger write in 2005, The death of environmentalism: Global warming politics in a post-environmental world,

“We believe that the environmental movement’s foundational concepts, its method for framing legislative proposals, and its very institutions are outmoded. Today environmentalism is just another special interest. Evidence for this can be found in its concepts, its proposals, and its reasoning. What stands out is how arbitrary environmental leaders are about what gets counted and what doesn’t as “environmental.” Most of the movement’s leading thinkers, funders and advocates do not question their most basic assumptions about who we are, what we stand for, and what it is that we should be doing.”

As Lemann continues he points a finger toward a different era, most unexpected for a generation or two of environmental communicators and policy makers.

“In the summer of 2009, Democrats in the House of Representatives, joined by a handful of Republicans, passed a bill based on the USCAP framework. It was fourteen hundred pages long. Almost immediately, corporate members dropped out of the coalition; as the grand alliance unravelled, the bill languished in the Senate. After Harry Reid, then in a tight reëlection campaign against a Tea Party candidate, dropped it, Rahm Emanuel, the White House chief of staff, blasted the environmentalists’ political ineptitude at a private meeting. (Bartosiewicz and Miley obtained a tape recording.) The big environmental groups had promised the White House that they could deliver a few key Republican votes in the Senate. Instead, Emanuel said, “They didn’t have shit. And folks, they were dicking around for two years. And I had those meetings in my office so it was not that I wasn’t listening to them. This is a real big game, and you’ve got to wear your big-boy pants.”

As the political process in the United States has become arguably more corporatized, a fact of life that whatever is left of the “environmental movement” has become increasingly inured to, the game has become more clearly understood.

Ted Nordhaus and Michael Shellenberger writing in Yale Environment 360, The Flawed Logic of the Cap-and-Trade Debate, adopt an Ecological Modernist perspective, saying “both (James) Hansen and those he criticizes focus on pollution regulation and pricing to make fossil fuels more expensive, rather than on innovation to make clean energy cheap. This approach ignores the history of technological breakthroughs, which has primarily been driven by public investment. And public investment in clean energy is what is needed today, because no effort to achieve deep reductions in carbon emissions, domestic or international, will succeed as long as low-carbon energy technologies cost vastly more than current fossil fuel-based energy.” 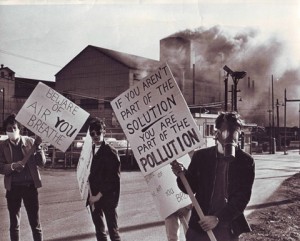 Both Ecological Modernists and traditional conservationists agree that ultimately, the environmental movement needs to learn to win with more effective strategies. That means not only what it communicates but how. What had been won and lost in the courts or in the halls of the House and Senate must now again be communicated to people, participating in the free market of capital and ideas. Ironically this harkens back to the age of earlier activists following the first Earth Day.

As Lemann notes in the New Yorker, “Earth Day’s success was partly a matter of timing: it took place at the moment when years of slowly building environmental awareness were coming to a head, and when the energy of the sixties was ready to be directed somewhere besides the Vietnam War and the civil-rights movement… Earth Day had consequences: it led to the Clean Air Act of 1970, the Clean Water Act of 1972, and the Endangered Species Act of 1973, and to the creation, just eight months after the event, of the Environmental Protection Agency.” 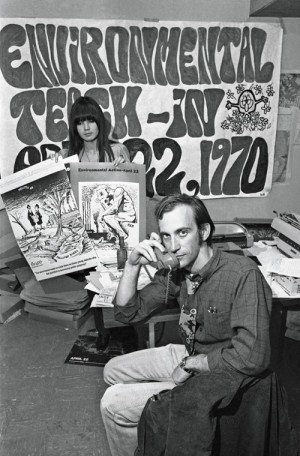 The lofty momentum the environmental movement enjoyed for almost 40 years following the first Earth Day crashed and burned in the summer of 2010, when Senate Majority Leader, Harry Reid, announced that he would not bring to a vote a bill meant to address the greatest environmental problem of our time—global warming. The movement had poured years of effort into the bill, which involved a complicated system for limiting carbon emissions. Now it was dead, and there has been no significant environmental legislation since. Today’s environmental movement is vastly bigger, richer, and better connected than it was in 1970. It’s also vastly less successful. What went wrong?”

There was little thinking about what might occur should the technological interventionists get it wrong. And get it wrong they did in the deserts of Southern California. A plethora of large solar technologies, developed at Sandia Labs in the 1980’s were trotted out as “shovel-ready” once ARRA stimulus funds became available. Many of these technologies like Stirling engines https://share.sandia.gov/news/resources/releases/2008/solargrid.html were overly complex and difficult to manage, yet were to be deployed in huge numbers. Despite high conversion of sunlight to power, the Stirling engines leaked hydrogen, sounded like a 1950’s lawnmower, and at a test bed in Phoenix, required one human “minder” for each of the 50 units there. Over 35,000 “Sun Catchers” would be deployed at Imperial 2 Solar (which was to be built on a Native American burial ground), another 35,000 would be built at the companion “Calico” project. The technologies had never been tested at scale, and hence embodied a level of arrogance and poor engineering that was truly stunning. Fortunately that plan was stopped by a lawsuit, Quechan v. BLM.

In the time since, the agenda, advanced by Ecological Modernists has been refuted http://www.nytimes.com/2014/02/14/business/energy-environment/a-big-solar-plant-opens-facing-doubts-about-its-future.html, see New York Times “A Huge Solar Plant Opens, Facing Doubts About Its Future.” http://www.kcet.org/news/rewire/solar/concentrating-solar/palen-solar-project-canceled.html

The American Environmental Movement had forgotten, quite simply, how to communicate with people, and particularly how to listen, in the face of abuses by corporations and government. Instead, they partnered with those corporations in the name of combating climate change.

“Isn’t it great that the large environmental groups and the utilities can lock arms on strategy. It just happens to be a very high impact strategy…” Bill Powers, PE, from “Who Are My People?” ©2014 Robert Lundahl.