I visited Standing Rock in September of this year, paying a visit while front line Water Protectors challenged construction of the Dakota Access Pipeline. They in turn became targets of TigerSwan, a paramilitary, mercenary security organization, spun off from the infamous Blackwater, deployed by Kelcey Warren’s Energy Transfer Partners.

My visit, more benign, consisted of checking in with the camps, purchasing drinks and juices for the Elders, Bison meat and Elk, a kitchen request for meat thus delivered, Prayer Cloths and Tobacco in Bismarck.

Several memories and thoughts flood my senses as a result of the last three months.

The Urgency of Protecting the Water

Earlier this month, a local landowner discovered an oil pipeline leaked into Ash Coulee creek. There’s no way to ascertain how long the pipeline had been spewing crude oil, as the monitoring system was unable to detect any issues.

Less than 200 miles away, Native Americans, activists, and veterans stand together to oppose a second project known as the North Dakota Access pipeline. Aside from the sovereign land dispute, many are concerned about the pipeline leaking into Lake Oahe, the Standing Rock Sioux tribe’s primary source of clean water. The lake flows into the Missouri river and is the primary drinking source for over 17 million.

The End of the Indian Nations?

Native American reservations cover just 2 percent of the United States, but they may contain about a fifth of the nation’s oil and gas, along with vast coal reserves.

Now, a group of advisors to President-elect Donald Trump on Native American issues wants to free those resources from what they call a suffocating federal bureaucracy that holds title to 56 million acres of tribal lands, two chairmen of the coalition told Reuters in exclusive interviews.

The group proposes to put those lands into private ownership – a politically explosive idea that could upend more than century of policy designed to preserve Indian tribes on U.S.-owned reservations, which are governed by tribal leaders as sovereign nations. 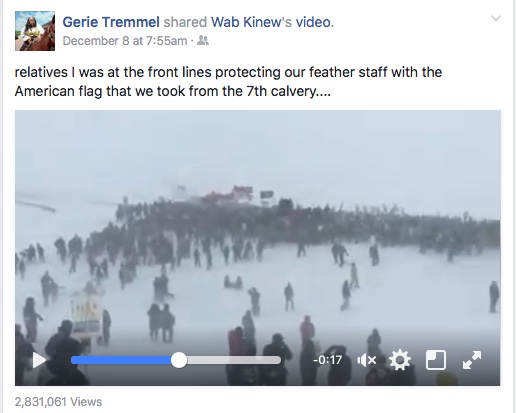 An image of unbreakable resolve speaks to me as I sit, warm, inside my home in California.

Germaine Tremmel, direct descendent of Sitting Bull and Founder of the Moccasin Telegraph Project visited the Front Lines at Standing Rock — in a blizzard — one day following the Army Corps of Engineers decision not to issue a permit for construction of the Dakota Access pipeline.

Gerie and Pat Brock teach the traditional ways of governance of the Lakota and Oceti Sakowin people, in support of the treaties signed by her ancestors, and the indigenous democratic traditions that influenced another, much younger nation, the United States of America.

Germaine Tremmel is an International Attorney and Lakota Chief.