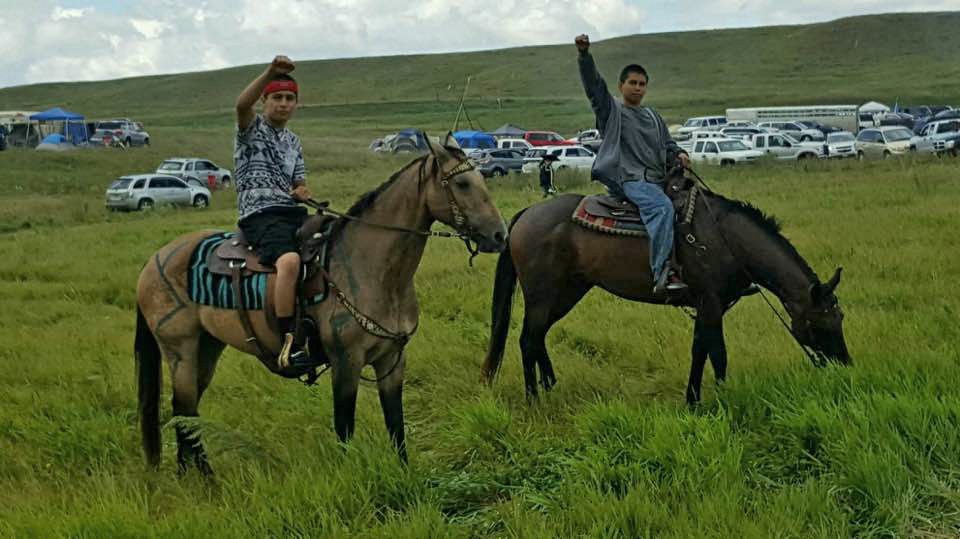 In Occupying the Prairie: Tensions Rise as Tribes Move to Block a Pipeline by Jack Healy, New York Times, Aug. 23, 2016 we see and hear about Indians in paint on horseback, in “procession” out of their “tepee-dotted camp.”

What Jack Healy misses in his over-romanticized account is journalism. His is the version Wall Street wants to hear, cowboys (Energy Transfer Partners) vs. Indians in face paint — a classic “Western.”

While the almost 500 Nations of indigenous brothers and sisters (over 90 are represented in the Sacred Stone Camp) are proud of the heritage of their peoples, it’s important to keep the focus on today and why we all are here, on this land, the homeland of the Standing Rock Sioux Tribe, a Sovereign Nation.

In fact, what we call the United States is really comprised of many Nations, it is a “united” Nations, of relationships formed by diplomacy.

The Greater Sioux Nation predates the United States, so as the newly minted USA acquired more territory, agreements were sought with the existing nations of the Plains and elsewhere. One such Treaty, the Treaty of Fort Laramie (1851), matters now.

According to Hollywood, every story needs a conflict. And calling this a “conflict” plays into the hands and the wallets of those who would like to profit from the energy game at other people’s expense.

Healy does a disservice to both the Native Nations, and to the investors and companies in the energy field, who rely on good practices to make a profit. Good practices seem hard to come by in North Dakota right now.

Sacred Stone Camp was begun by youth leaders, as a prayer. Their prayer is that the waters of the homelands of the Standing Rock Tribe – and all the peoples of the Oceti Sakowin, the “Greater Sioux Nation,” remain pure. That includes the Missouri River and it’s tributaries, flowing into the Mississippi – the greatest river system within the continental boundaries of the United States.

With over 200 river crossings, the proposed Dakota Access Pipeline puts the drinking water supply of over 17 million people at risk.

If only the Army Corps had done their job in protecting federally administered lands, unceded Indian lands, and Tribal lands, relying on science and judgement in protecting Indian culture from construction and destruction, things would be different today. However, whether by intention or omission, the Army Corps broke federal laws, and didn’t do their job.

The state didn’t do its job, overstepping jurisdictions and boundaries placing police barricades inside a Sovereign Nation’s borders, disrespecting treaties, and conducting an illegal “occupation” in direct counterveillance to most of the provisions of the United Nations Declaration on the Rights of Indigenous Peoples.

The Governor of North Dakota didn’t do his job, when instead of ensuring all parties get to the table on energy and environment, he let negative words and accusations cloud hearts and judgement, and threaten people.

The thousands arriving on the banks of the Cannonball River, from across the USA are Protectors, not Protesters. They are protecting the environment from being “savaged” by speculators, carpetbagging Texas energy companies, and lone wolf billionaires.

Don’t let them take our public, and our Native lands, and the resources they hold, and the water we all depend on for our future in a changing world and climate.