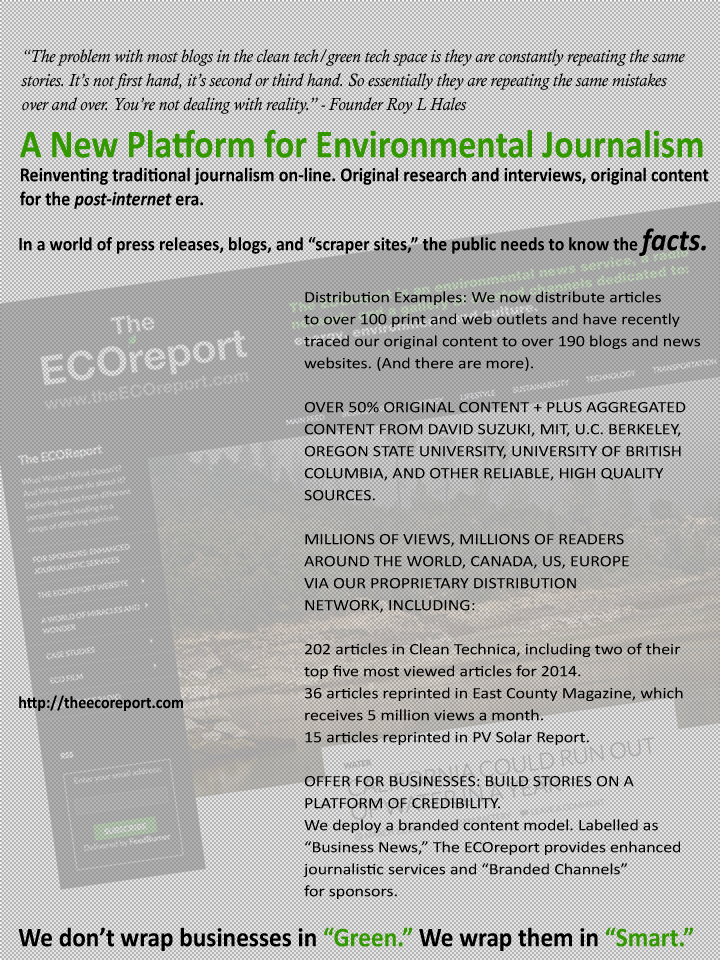 THE ECOREPORT LOGS WORLDWIDE DISTRIBUTION TO OVER 190 WEBSITES

CORTES ISLAND, BRITISH COLUMBIA AND SOLANA BEACH, CALIFORNIA–A recent audit of websites publishing content from the ECOreport, in the form of original articles on topics including energy and the environment, revealed extensive distribution far exceeding estimates. The ECOreport.com is a web based platform for the practice of traditional journalism and storytelling in an era which has been characterized by the prevalence of blogs. Many blogs routinely advise writers to “change a couple of lines” from an already existing press release in order to appeal to Google search algorithms. This unfortunate set of expectations has the result of dumbing down content and “repeating the same mistakes over and over, (so that) they’re not dealing with reality,” says Roy L Hales, Founder and Editor of The ECOreport.

The advent of the internet and its ability to mass replicate information created the devaluing of traditional journalism as costs went up and revenues went down. Many news organizations went out of business, or ceased print publication in order to survive. On the whole the trend was toward lower quality and less thoughtful writing and editorial, as former readers became “surfers” of web-based experiences.

The resulting phase of social media development further exacerbated the problem. The so-called “Facebook Era,” or “Social Media Era,” arguably trivialized human communication, though some bright spots emerged in the ability to syndicate data. The problem remains, however, that data is two steps away from knowledge and useful information.

As we look outward past our screens to the world around us we see that the greatest human drama of our age is the drama of how human beings interact with the planet on which they reside. Younger generations face an uncertain future. Concerns like the availability and quality of water, food sources, impacts from pollution, rising sea levels and atmospheric temperatures, call into question the health of our economies, physical well being, and ecosystem carrying capacity. Mass species extinctions are already occurring and ocean health is suffering from a variety of factors including radiation releases and carbon absorption and acidification.

In this climate the most illogical response would be to allow information and human storytelling to become ever more limited in the times when the survival of the human species may well be dependent on how well we communicate, and whether we learn from each other and events around us. Corporations and governments are well aware of the problems as they seek to mitigate risks and provide for economic opportunity.

At the ECOreport, what we found, noting the collapse of the relevance of the “blog-o-sphere”, is that the few remaining sources of factual reporting and information gathering are proving their value after all. The ECOreport relies on over 50% original material produced from first person research and interviews, alongside vetted and valuable aggregated content primarily from university sources and trusted content providers like David Suzuki.

The end result is to create a trusted and credible platform which then allows a new economic model to take shape. A “Branded Content” model such as that in use by major publications such as the New York Times, provides enhanced journalism services to select sponsor organizations in developing story material in a manner in keeping with the overall editorial perspective of The ECO report. “Branded Content” from sponsors, developed in a journalistic fashion, is tagged “Business News”, so as to make clear its sourcing. “Branded Channels” are created for sponsors to present stories related to business models and technologies within a contextualized framework. These “Branded Channels”, so labeled, exist on a “platform” of journalistic excellence and editorial perspective. The reader should rightly notice no different in the utility of the information, nor in the interest level it generates.

“Much corporate or ‘Business News’ exists as single source material, says ECOreport Partner and President, Robert Lundahl. That, in and of itself, does not mean such stories lack credibility, it simply means that technically, the story may not be confirmable from a second source.”

Lundahl continues. “We live with the responsibility as citizens and news consumers to know the difference. The ECOreport allows readers to use their own judgment given the proper labeling of the source material. In that way, we create a revenue steam for the publication that supports traditional journalism and does not diminish it’s value, while adding necessary vetting and review of content sourced from outside.”

The ECOreport is proud to count our early successes in reaching a wide global audience, and in reaching and engaging thought leaders around the world, whether in Non-Profit, Government, or Corporate communities. The challenge of our era demands we communicate beyond superficial barriers and engage in a whole-hearted dialog about “what works, what doesn’t, and what we can do about it.”