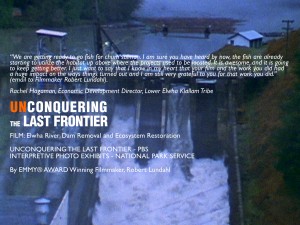 comes from setting about to change a complex narrative. In the case of “Unconquering the Last Frontier, the question of whether the existing narrative was to the detriment of the Lower Elwha Klallam Tribe and to Olympic National Park, was an important question and providing an answer to that question was one of the reasons the film was made.

When the film was begun, the story of a river and ecosystem unrestored, a goal said to be “impossible to achieve,” a tribe without the economic resources or a natural bounty, and an underfunded National Park fighting anti-federal, “Wise Use” groups, would all seem to suggest the existing “it’s Impossible” narrative was detrimental in impact — to the community — and to the resource. But by the time the film was finished and screened, the tables had been turned. 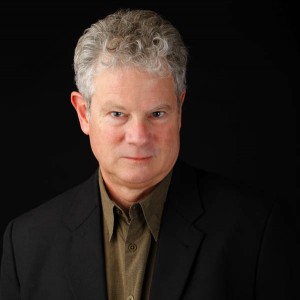 In creating documentaries and campaigns, we set a process of re-calibration and re-articulation in motion. Expression catches up to the facts and is shared across boundaries.

Similarly, one could say that the Sun Microsystems at the beginning of Digital Journey Series creation and production was a different company, one less defined in terms of its mission than following. The tagline, “The Network is the Computer” had become visual and undeniable through our work.

“Song on the Water,” brought into being in a collaboration with The Long House Association, became a gift of healing to Coast Salish and Nuu Chah Nulth peoples. Long suffering, it portrayed these tribal groups (over 50 communities) in a light in which they wished to be seen. The impact of the documentary’s screening, via public television, over 240 times, was significant, both within tribal communities and outside.

class=”alignright size-full wp-image-7773″ />Premiering on KCTS, Seattle, the film acquired viewership during the presentation. Ratings were higher at the end, than at the beginning. “Song on the Water” aired in over 80 television markets, nationwide.

Films have the irrefutable ability of handling large amounts of information.

Social, cultural, and anthropological affects that have occurred as a result of making the films described, suggest the film that we look at is the byproduct. That may come as no surprise given that Top Gun boosted Navy enlistment.

The process is the product. Involvement created a better outcome.

Information today is in a transitional age. Our clients are dealing with information in an ever changing environment. Scott McNealy said the best way to know the future is to create it.

It’s not the same old song and dance. We provide a supportive or helper role. This is going to the “feeling” level — helping a major organization manage difficulties. Our clients are on the frontier, of change, of information, or policy, and they are carrying the standard of what that means. The results can be compelling.

“I’ve made a lot of films but I’ve never changed actions on the ground” (referring to Palen project withdrawal — Saving Joshua Tree National Park from nearby development — “Who Are My People?”).

At RL | A, we’ve stimulated change, prevented bad things from happening, and made other things turn out better than expected.

“We are getting ready to go fish for chum salmon. I am sure you have heard by now, the fish are already starting to utilize the habitat up above where the projects used to be located. It is awesome, and it is going to keep getting better. I just want to say that I know in my heart that your film and the work you did had a huge impact on the ways things turned out and I am still very grateful to you for that work you did.” (email to Filmmaker Robert Lundahl).