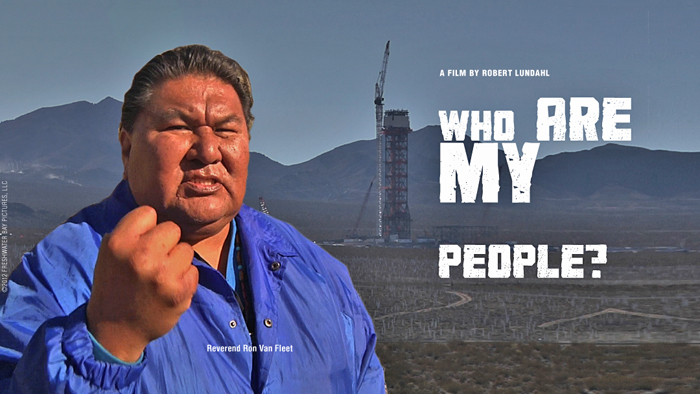 LOS ANGELES, CA–Film Maker Robert Lundahl, whose naturalistic documentaries have taken him “from Shanghai to Curitiba” for an intriguing mix of high flying corporate clients and NGO’s, is beginning a web-release for the film, “Who Are My People?’ That web-release begins with the public availability of several clips for the press. Follow this site for more updates and out-takes.

“Who Are My People?” is about the indigenous communities of California’s Mojave desert who now face destruction of sacred sites on a massive scale as a result of Large Solar and Wind Development.

It’s a cause Lundahl cares about deeply, having made two previous long-form documentaries and several shorts with Native American communities, which have aired on cable and public television in the U.S. and Canada. “Song on the Water” (2005) http://youtu.be/oQtunWokWMc, an ethnographic documentary, travels with 50 indigenous communities on a traditional canoe journey to a modern-day potlatch.

“Unconquering the Last Frontier” (2002) http://youtu.be/Evv2wwzrM5Q describes the 300 MM USD Elwha River Dam Removal and Ecosystem Restoration program. Because of a working familiarity with Indian Law gained in Washington state, Lundahl saw the need for an improved process of consultation with tribes.

“Are we seriously setting back the treatment of Indians 150 years, rolling back any real sovereignty, and once again taking their lands and history for the profit of private companies on public lands?” Lundahl asks, rhetorically.

“It doesn’t matter if you say you’re green or not. There can be no respect for the environment without respect for the peoples and cultures that grow from it. It’s an eco-justice issue; it’s a human rights issue. This fast track process of leasing public and indian lands violates 8 U.S. laws and most all of the 24 provisions of the United Nations Declaration on the Rights of Indigenous Peoples (UNDRIP).” Lundahl concludes.

“Who Are My People?” Clip/Screener #1 from Robert Lundahl on Vimeo.

“Who Are My People?” Clip/Screener #2 from Robert Lundahl on Vimeo.

“Some people look out at the desert and see emptiness. I see miles and miles of a gold mine.”

“Who Are My People? Clip/Screener #3 from Robert Lundahl on Vimeo.

“History becomes religion. If you look at our own cultures, ancient and important architecture that is part of our political or religious history becomes sacred.”

“Who Are My People?” Clip/Screener #4 from Robert Lundahl on Vimeo.

“Who Are My People?” Clip/Screener #5 from Robert Lundahl on Vimeo.

“They only thing you understand is the money, and so you violate. We told you. So maybe 10 billion dollars you would understand.”