Google’s investment at Ivanpah, the first of the large solar deployments, exemplifies the point that what is lacking from a public dialog on energy deployment and the DRECP, Desert Renewable Energy Conservation Plan, is a focus on consequences and feedback.

Grading 5 square miles of pristine desert tortoise habitat (a protected species), the plant is thought to have ended the existence of 1000 adult tortoise. BLM documentation includes loss of 1000 burrows as a separate incidence. Not only do these figures not “add up” but they also do not account for the death of juveniles — hard to find since they are underground –– and the loss of eggs. All told, one can only surmise that the impacts to the desert tortoise population at Ivanpah are in the multiple thousands. Given a BLM propensity toward undercounting impacts, it may be more that a simple counting suggests.

In addition, federal wildlife officials said Ivanpah might act as a “mega-trap” for other wildlife and avian species, with the bright light of the plant attracting insects, which in turn attract insect-eating birds that fly to their death in the intensely focused light rays.

Federal wildlife investigators who visited the BrightSource Energy plant last year and watched as birds burned and fell, reporting an average of one “streamer” every two minutes.
The investigators want the halt until the full extent of the deaths can be assessed. Estimates per year now range from a low of about a thousand by BrightSource to 28,000 by an expert for the Center for Biological Diversity.

These facets have been known for two years, but the large solar facility at Ivanpah, flagship of the ARRA stimulus program, whose investments were made through loan guarantees and cash grants, now relies on 40% burning of natural gas to fulfill contracts.

“Google’s boldest energy move was an effort known as “RE>C,” which aimed to develop renewable energy sources that would generate electricity more cheaply than coal-fired power plants do. The company announced that Google would help promising technologies mature by investing in start-ups and conducting its own internal R&D. Its aspirational goal: to produce a gigawatt of renewable power more cheaply than a coal-fired plant could, and to achieve this in years, not decades. 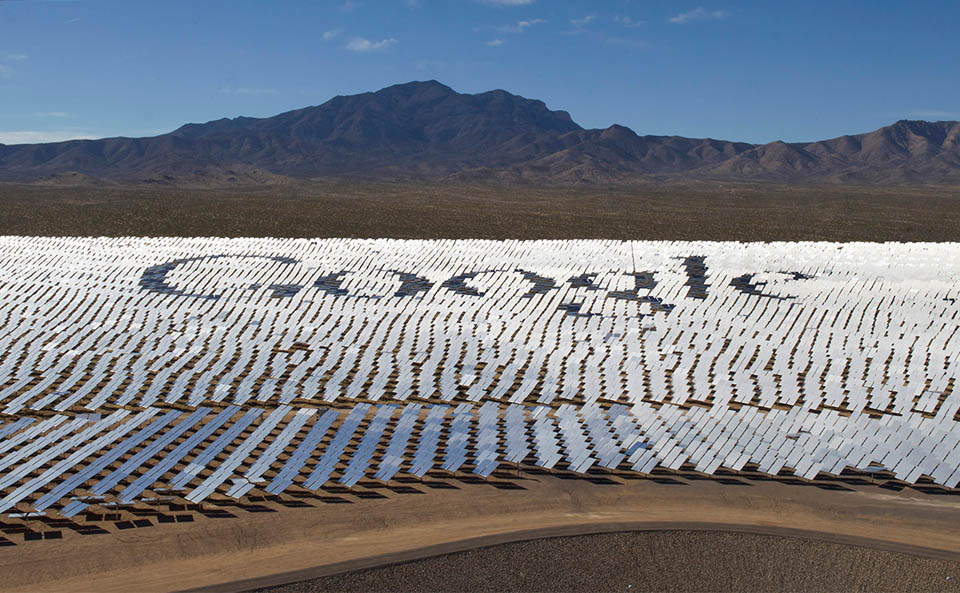 Unfortunately, not every Google moon shot leaves Earth orbit. In 2011, the company decided that “RE>C” was not on track to meet its target and shut down the initiative. The two of us, who worked as engineers on the internal “RE C” projects, were then forced to reexamine our assumptions.”

These engineers mention that the “RE>C” failed to generate enough power in projections to offset coal, much less roll back climate change. This is an example of what is called “score-carding.” Adding and subtracting the line items but failing to address the consequences and feedbacks of a specific system. The reader is left to assume from the article that this was a well meaning “overshoot.” Something engineers have been tasked to “learn from.”

Was no one paying attention to the facts on the ground, the real world consequences and feedback? What about the social, cultural, environmental context? The article suggests an industry black eye.

Ross Koningstein & David Fork explain that unfortunately Google couldn’t solve “The Climate Problem” and the program was shut down. Their explanation admits no accountability for presumed capital losses due to inadequate power production, likely construction over-runs, a large solar industry of debunked Power Tower technologies exemplified by the failure to permit subsequent projects by co-owner Brightsource (Hidden Hills, Rio Mesa, and Palen). Nor does it acknowledge public and tribal opposition.

It comes as no surprise that several large environmental groups like NRDC and the Sierra Club, in supporting large solar, “flunked” the class. Ivanpah co-investor, NRG’s more acculturated and technology savvy CEO, David Crane, says despite these mega-projects, ultimately he sees no future for high-voltage transmission lines. “It’s idiotic to put panels in the desert and transmit electricity to cities.” Noting that there are 130 million wooden utility poles across the U.S., Crane wryly observed, “The 21st century economy should not be based on wooden poles.” Crane envisions a distributed solar future, whether it’s through rooftop or parking lot installations, observing that solar photovoltaic (PV) technology downsizes well.

Crane recently led NRG into a partnership with Nest https://nest.com/press/nest-partners-with-energy-companies/, a company that provides home energy-consumption solutions with an emphasis on elegant design. Crane sees a natural interplay between Nest’s technology and rooftop solar, into which NRG is increasingly expanding.